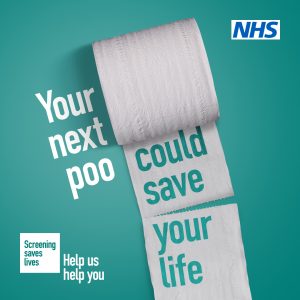 NHS London has launched a new campaign to encourage more people who have been sent a free NHS bowel cancer screening test to complete it.

Screening can help prevent bowel cancer or find it at an early stage when it’s easier to treat. Those who complete bowel cancer screening are 25% less likely to die of bowel cancer.

Bowel cancer screening is carried out using a home testing kit called the faecal immunochemical test kit (FIT kit for short). The test looks for small amounts of blood in the stool, that wouldn’t be noticeable by eye. Finding blood doesn’t mean cancer has been detected, but means further tests, such as a colonoscopy, may be required.

Everyone aged 60 to 74 years who is registered with a GP and lives in England is automatically sent an NHS bowel cancer screening kit every 2 years. The programme is expanding so that everyone aged 50 to 59 years will be eligible for screening.

This is happening gradually over four years and started in April 2021 with 56-year-olds. The programme has also started to include 58-year-olds, so individuals may get a bowel cancer screening test kit before 60.

London Director of Public Health, Professor Kevin Fenton said: ‘Bowel cancer is one of the most common cancers. In the UK, 43,000 people are diagnosed with bowel cancer and over 16,500 people die from it each year – more than 45 a day.

‘Screening – which you do in private at home – can help prevent bowel cancer or find it at an early stage when it’s easier to treat.

“That’s why the NHS sends out free bowel cancer screening kits to use at home. They are for people with no symptoms and most people get the all-clear. If you are sent a kit, please use it.’

People with symptoms of bowel cancer at any age, such as persistent change in bowel habit, blood in the stool without other symptoms of piles, discomfort or bloating always brought on by eating, or abdominal pain, should always contact their GP practice, even if they have recently completed an NHS bowel cancer screening test.