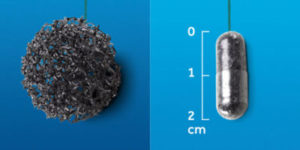 A pilot using a new diagnostic technique to improve the diagnosis of upper gastrointestinal cancer has just launched at Croydon Health Services NHS Trust. The Cytosponge procedure is quick, safe, and extremely effective and does not require sedation. It should also minimise the waiting time from being referred to being seen at hospital.

Problems with heartburn and acid reflux are very common, but occasionally this can lead to changes in the normal cells that line the oesophagus. Very rarely these cells can develop into pre-cancerous or cancerous cells and may lead to oesophageal cancer. When changes to cells are found early it can make any treatment much simpler and the impact on a patient is much less significant.

Patients in the borough who contact their GP with low-risk symptoms, such as heartburn or reflux, will be referred as usual to the Trust. Once the hospital receives the referral, the team will determine which patients are eligible to be offered Cytosponge as an alternative to invasive gastroscopy.

A Cytosponge is a small capsule on a string, similar in size to a vitamin tablet. The capsule contains a sponge which is collects a sample of cells from the oesophagus as it is removed. The sample is then sent for analysis to determine if there are any abnormalities.

During the short procedure patients swallow the Cytosponge capsule and string along with some water. The end of the string is attached to a piece of card which the nurse will hold. The capsule dissolves in the stomach in around 8 minutes, releasing the sponge. The nurse will then gently pull up the sponge by the string, which takes only a couple of seconds and should not be painful.

The result of the Cytosponge will indicate which patients are low risk and can be managed in primary care or those who need further investigation. Cytosponge can also diagnose other oesophageal conditions apart from cancer.

Dr Sanjay Gupta, consultant gastroenterologist at Croydon Health Services NHS Trust said: ‘I am really excited to be the lead for this pilot project at Croydon, which I think will revolutionise the way we investigate patients with low-risk gastro-oesophageal reflux disease. It will also be much more comfortable and acceptable to patients.’

The Croydon project is part of a wider NHS pilot scheme to trial the use of Cytosponge. The results will be evaluated to determine its impact and whether it should be implemented nationwide.