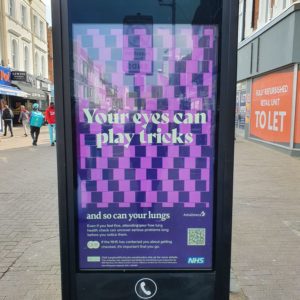 A dramatic new campaign was launched in three boroughs in west London to make residents aware of the importance of taking up invitations to attend a lung health screening.

The campaign, a collaboration between RM Partners, the West London Cancer Alliance, and AstraZeneca, used striking optical illusion imagery to drive home the message that it’s not only our eyes that can trick us – so can our lungs, with some people potentially having an undetected lung health condition despite feeling fine.

The campaign was aimed at residents in Hammersmith and Fulham, Hillingdon, and Sutton, who have been invited to have a lung health check. The aim was to encourage them to take up the invitation with the message that the check can detect serious problems before symptoms are noticed.

The targeted campaign was seen on Facebook, Google and out-of-home advertising such as bus stops in the local area. It was created and funded by AstraZeneca as part of the Lung Ambition Alliance initiative, a global coalition of organisations whose goal is to one day eliminate lung cancer as a cause of death.

The RM Partners Targeted Lung Health Check project invites past and current smokers in Hammersmith & Fulham for a free NHS lung health check in a drive to improve earlier diagnosis of lung conditions, including cancer.

The lung health check takes place in two stages. The first is an initial phone assessment with a specially trained respiratory nurse from the team at the Royal Brompton Hospital. If the assessment finds the person to be at high risk, they are offered a low dose CT scan of the lungs for further investigation.

Depending on the outcome and location, patients will be invited either to the Royal Brompton Hospital or to a mobile unit in a supermarket car park to have a low dose CT scan. Patients can be assured that the team carries out a number of measures to keep everyone safe, including wearing personal protective equipment and robust cleaning procedures.

If patients need further assessment or treatment following their scan, they will be referred on to local services.

Arun Krishna, Head of Oncology at AstraZeneca UK, said: ‘Catching lung cancer at an early stage can make a big difference to how the disease is treated and, ultimately, survival outcomes for the patient. The targeted lung health check programme can help people at high-risk of lung cancer to detect the disease earlier, but its success relies on people taking up the invitation to be screened.

‘The Check Your Lungs campaign highlights the importance of having a lung health check, aiming to increase the proportion of people who come forward for an appointment.  We wish RM Partners every success in this project, as part of the pilot Targeted Lung Health Check programme that is being rolled out across the country.’

More information is available at: lunghealthchecks-westlondon.nhs.uk. This campaign was organised and funded by AstraZeneca.